which should explain dark matter and dark energy

Some phenomena in nature have not yet been unambiguously explained. For example, we observe a red shift of the spectral line caused by the gravity of the observed star. We also observe a shift in the spectral line created by the speed of the star. Both shifts of the spectral line can be significant, which means that based on known measurements we may not know what part of the red shift belongs to the motion of the star and what part to its gravity. As a result, we may be mistaken about space expansion. On the other hand, some measurements cast doubt on the fact that the speed of a light source affects the wavelength of light, which is contrary to current physical knowledge. Measurements show that the speed of the light source affects the frequency of the light, but not necessarily its wavelength. Clear answers to these questions are important, as they can crucially clarify the view of dark matter and dark energy. This article does not provide definitive answers to these questions, but rather encourages physicists to find clear answers to these questions in a new study based on the analysis of already known measurements and new measurements.

The measurement results of light measurement sometimes surprise us. One such example is the measurement of fairly varied events on the Sun, where we observe solar flares. The plasma of a solar flare can be observed optically, with telescopes. Observations show that particle velocities in the eruption are up to a thousand km/s at temperatures of tens of millions of K. When such a solar eruption is measured based on the spectral line in light from a solar eruption, light wavelength scattering is measured at 0.3 A ( Angstrom) (+-0.15 A), as shown in Figure 1. 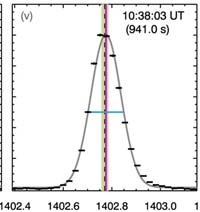 Measuring the wavelength of light from the Sun.

Let us focus on another of the measurements of light from the Sun, which is described in the article The shape of spectral lines. In this measurement, we observe a spectral line of wavelength 6546.25 A and its width 0.12 A (+ -0.06 A). It is shown in Figure 2. 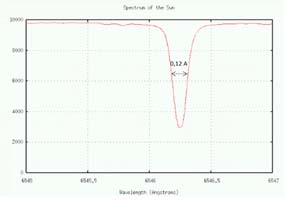 Surprising is its narrowness, which according to Doppler’s law allows small velocities of luminous particles in the Sun. The speed of the particles in relation to its width can be a maximum of a few km/s. (The ratio between the particle velocity (Δv) and the change in the wavelength Δλ according to Doppler’s law can be estimated on the basis of the equation Δv / c = Δλ / λ).

Bursts of glowing matter (spicules) appear above the granules over the entire surface of the Sun, spewing glowing particles at speeds of 15 to 100 km/s. Based on Doppler’s law, these moving particles should expand the spectral line shown in the figure ten or more times, but this does not happen.

The small scatter of the wavelengths of the spectral line, as shown in Figure 2, may be due to the fact that:

The shape of the spectral line in Figure 2 therefore offers a challenging hypothesis that states, “The speed of a light source according to Doppler’s law affects the frequency of light, but not its wavelength.”

The hypothesis of always the same wavelength of light with respect to the speed of the light source can be tested on the basis of another measurement of light from the Sun. This does not require waiting for various rare astronomical phenomena. The sun revolves around its axis at a circumferential speed of 2 km / s. One part of the edge of the Sun is approaching us, and the other edge of the Sun is moving away from us.

The wavelength of light at both edges of the Sun can be measured in two ways.

The first method is shown in Figure 2 and is described in the article The shape of spectral lines.

The same wavelength always occurs only in the first method of measuring λ, and not in the second mentioned method f. The deflection grid changes the wavelength of light, as described below.

As light passes through the diffraction grating, its wavelength changes.

This hypothesis is neither confirmed nor rejected in the physical literature, although such a hypothesis can have a major impact on the understanding of light.

Proposed measurement to confirm the hypothesis

Maybe there should be no turbulence in the light source. This ensures the same speed of the light source for all light waves. The source of light can be a comet or one of the planets (Mars, Jupiter).

Without the use of a diffraction grating, the measured spectral line has a hypothetically different wavelength than if light had previously travelled through the grid. We measure the deflection beam (m = 0), where light travels straight through the grid and does not deflect on it. Any spectral line is suitable for measurement. This measurement is the next research initiative in physical science.

Measurement of gravity (mass) and velocity of stars

In the light from the Sun, the gravitational shift of the wavelength of the spectral line (L. A. Higs: The solar redshift)  was measured at about 630 m/s. This is the gravitational lag, based on which we can estimate the mass of the Sun, not its speed. On the wavelength shift, it could be wrongly concluded that the Sun is moving away from the Earth at a speed of 630 m/s, which is not true.

The change in the frequency of light indicates the speed of the star, and the change in wavelength reflects gravity or its mass.

The aim of the research

An objective representation of the universe may not need dark matter. The notion of dark matter and ternary energy may be superfluous; this should be shown by the above measurements.

Albert Camus in his novel The Plague describes how people in the city of Orano avoided the thought of being affected by the plague. They rejected the thought of the plague. A similar thing happens to us when observing light. Anomalies are observed in the properties of light. We do not want to see these anomalies. However, if they are so obvious that we cannot overlook them, we argue them in a customized way, as the observed disease symptoms were argued in Oran. They were looking for ways to deny the plague. Only when the plague was called by its real name could they oppose it. It will be similar in the area of light and understanding of the universe. When we point out the deviation of the behavior of light from the known physical laws, we will be able to successfully explain them.